By 7:30 a.m., everybody was ready to go for breakfast. As most ethnic Chinese from Sibu can't take very spicy food, Kota Bharu Chinese food was preferred (though I actually prefer spicy food). So, we went to Medan Selera Satu Enam Lapan, a small Chinese eating place with 6 - 8 hawkers' stalls. My friend had pointed out the place a day earlier. It was located about 100 metres from Pelangi Mall, where we were staying. There was the usual Malaysian fare such as kolo mee, char kuay tiau, etc. 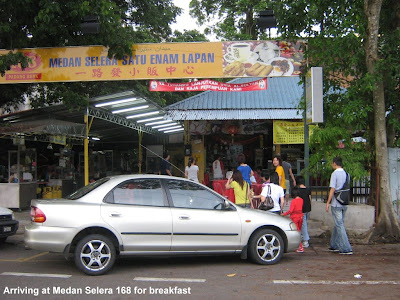 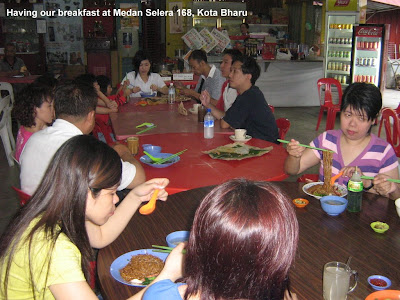 I had the simple nasi dagang, and the char kuay tiau. 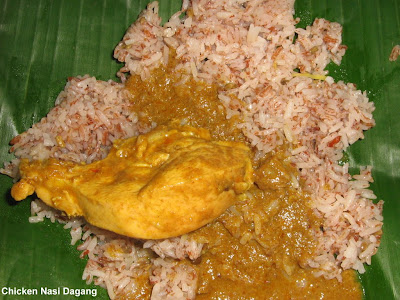 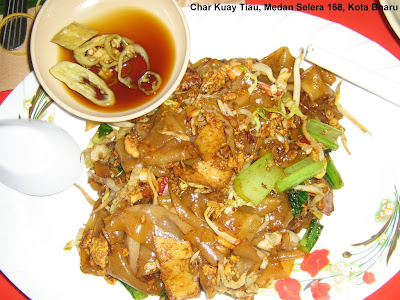 The taste for both was below average. After breakfast, I strolled around the adjacent area when the anticipated call came. It was half an hour earlier. The agreed departure time to Kuala Besut was 9:00 a.m. Nevertheless, I rang up the rest to get everybody to pack and be ready for the departure.

After handing both sets of keys to one of the apartment owners, who was staying nearby, we departed in two vans, to Kuala Besut.

The vans took us straight to Restoran Makanan Laut Lucky coffee shop, HQ of Fauna Holiday Sdn. Bhd. Though it has an office at Terminal Pelancongan Besut, we were told by our Fauna guide that it was hardly occupied. Our luggage was quickly transferred to a mobile cart. At the same time, the final payment was collected and paid to Mr. Ong, the boss of Fauna Holiday Sdn. Bhd. 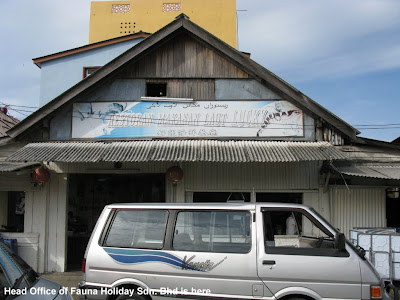 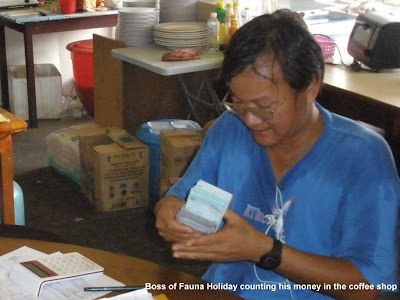 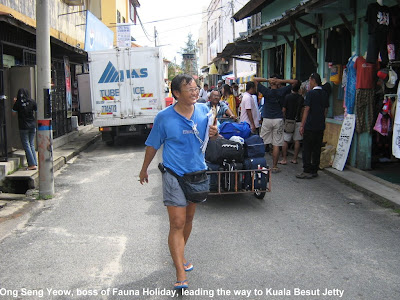 With Mr. Ong leading the way, we proceeded to Terminal Pelancongan Besut, the ferry terminal. It was a short walk. After we arrived at the ferry terminal, Mr. Ong went to perform some routine formality with the terminal official. 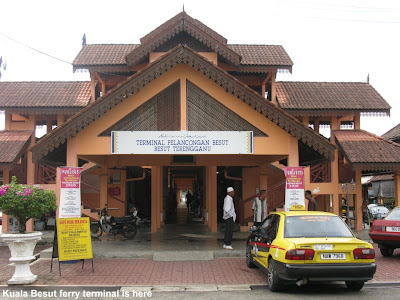 We were then allowed to enter the departure gate and boarded two speedboats to our destination, New Cocohut Chalet on Perhentian Besar. 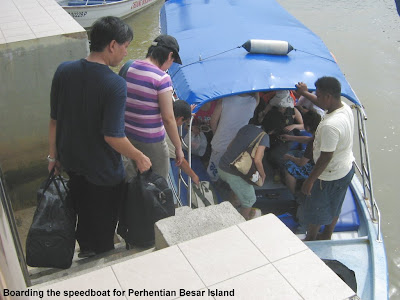 After a bumpy 30 minutes, we arrived. To our relief, we did not have to transfer to smaller boats, which I read from blogs, was necessary because the large speedboat could not land near the shallow water. There were two jetties just in front of Tuna Bay Resort, with one having being completed on the day of our arrival. We disembarked there, and we did not have to get our feet wet or having to wade through water to the beach. Let this day, 3rd May 2009, be remembered as the date the second jetty was completed. 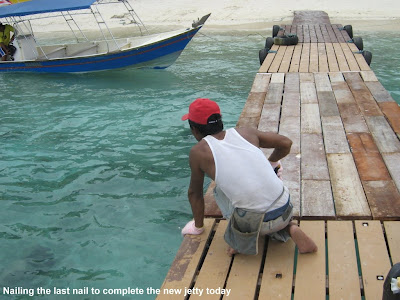 We were greeted at the jetty by a Fauna Holiday Sdn. Bhd guide. He led us to our accommodation, Rooms C7 to C11, on the ground floor of the double storey longhouse. 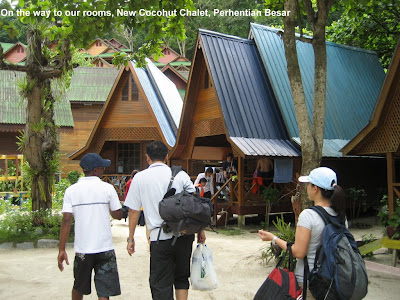 The time was around 11:00 a.m. Mr Annuar, our guide for the duration of our stay, informed us that lunch would be served at 12:00 noon and we would depart for our snorkelling trip to six points, at 1:00 p.m. 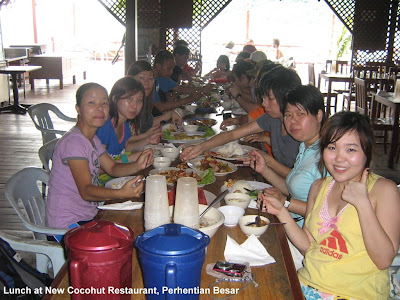 Earlier, one of my colleagues collected the snorkelling gears from our guide so that we could wash and clean them first.

Now, when you are on a snorkelling trip, be reminded that if you are prone to sea-sickness, take travel sickness tablet ½ an hour earlier. The sea will be choppy. If you stay in the boat when others are snorkelling, you shall find yourself sick very quickly. That was what happened to one of the girls who stayed behind in the boat to ensure the safety of our cameras, wallets, bags, etc. Luckily for us, Annuar was kind enough to oblige our request to send the girl back to the chalet before we went to the second snorkelling point. Our earlier request to get the girl ashore at the snorkelling point was turned down because by landing, coral by the shore would be damaged. So, be warned. As for me, I got sick easily, either in the boat or water, but fortunately for me, I could still manage the sea-sickness. I snorkelled at two points only before giving up, having swallowed and choked on sea water. Those who do not get sea sick will be able to enjoy themselves snorkelling in the crystal clear water to look for Nemo, black tip sharks, Ninja Turtle as well as large blossom of coral. 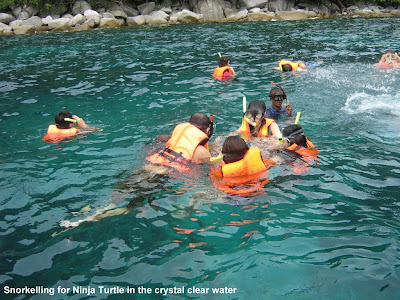 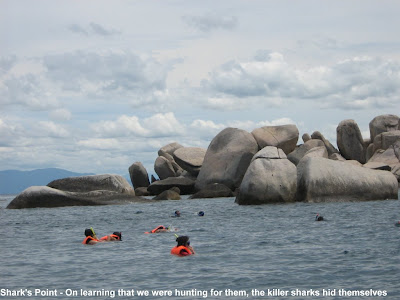 Coral does not look as pretty in the water as those you see in aquarium because of light refraction. For a first time snorkeller like me, the water looked shallow from above the water but once you put your face down into the water, the sea suddenly look so deep, because there is no light refraction.

The best part of the afternoon was the last stop at Spring Water or Air Berani at the south-west of Perhentian Besar, within Teluk Dalam Bay.


When you splash the cold spring water on girls, they will scream so loudly. The change from swimming in the warm sea water to bathing in the cold spring water will give you an amazing feeling, a great chill. The spring water is safe for drinking. For those who are sea-sick, the cold water will arouse you from your dizziness. Bring some clean bottles to collect the spring water and bring them home as souvenir or for your friends at the office. I brought an empty bottle but lost it. Though we would like to stay longer, we had to leave as it started to rain.

We were back at the chalet already before 4:00 p.m.. After taking our bath, we rested for a while. As dinner was at 7:00 p.m., we had a lot of time to kill. So, at 5:00 p.m., we took a long beach walk from New Cocohut, at one end of the beach to Teluk Keke (or Teluk KK), to the southern end of the beach. We were rewarded with rustic scenery as we passed by abandoned jetty and building, beautiful rock formation, silky smooth white beach at Teluk KK and crystal clear water. 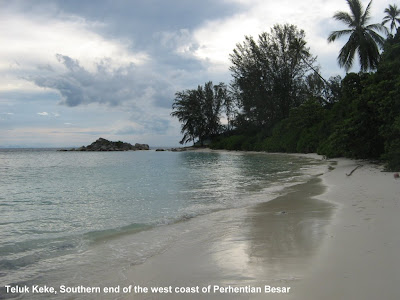 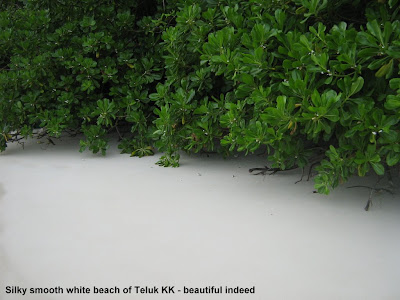 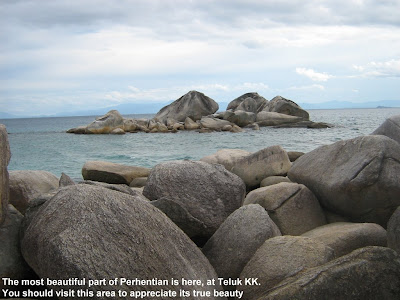 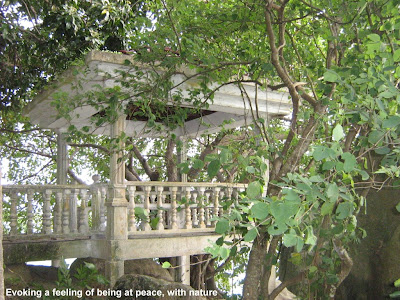 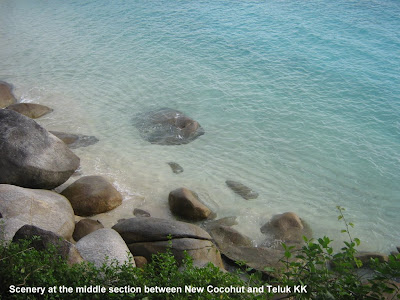 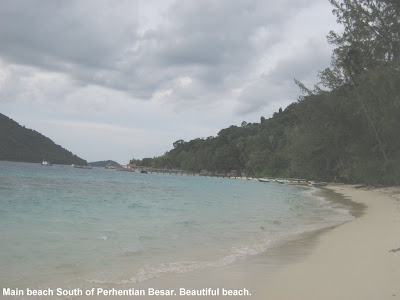 It was an hour long walk to and back.

At night, there was nothing to do. You could watch ESPN on a large screen at New Cocohut Restaurant or chatter away lazing on the lazy chair by the beach beside the chalet.

Posted by One Short Life at 9:27 PM No comments:

The following is a detailed report of our trip.


After about 10 minutes' wait, my friend arrived with his youngest daughter. He was delayed by the Kota Bharu traffic jam. It was very nice meeting them again after a year. The school bus which he arranged to pick up our group arrived earlier. After our group boarded the bus and I joined my friend and his daughter, Nita, we proceeded to Pelangi Mall Apartment. We arrived shortly after. We have two units booked for the night.


After a few calls, the owners came with the keys and we proceeded to our units at levels 15 and 17. Our makan trip was delayed because of the small talk we had with the owners, such as how to return the keys the next day, how to find our way to the supermarket, etc. We finally left for our dinner, with my friend and Nita leading the way. Not all of them joined us. We went to Pantai Timur Supermarket and to Medan Selera when we were caught in a sudden downpour and were trapped at a hawker's stall. 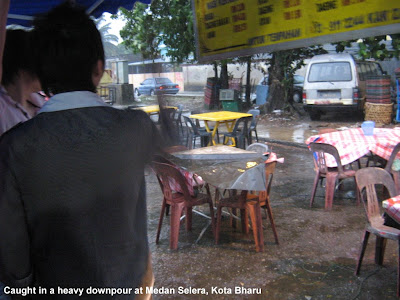 After the rain stopped, we moved on to Chinatown to Kow Lun Restoran for our dinner. There were very few Chinese eating establishments here in Kota Bharu.


As I wanted to try authentic Kelantanese food, I asked my friend what I should try at Kow Lun Restoran. He said that there was none. In the end, I tried a bowl of "lo tu ka" (stewed pork leg) with rice. It was something new to me. It has a mixed of pork and chicken feet. Not bad. I would give it a 7/10. 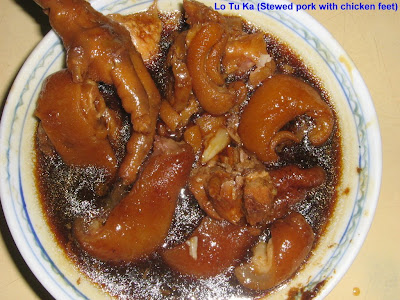 Just in front of Kow Lun Restoran was a Malay hawker stall, selling different varieties of saliva-inducing spicy food. There were a lot of customers waiting, but nobody was queuing up. So whose turn would come first? Impatient for a long wait, I decided to let go of the opportunity. 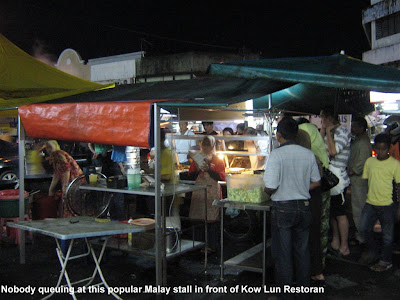 Our group later broke up. After shopping, my friend invited me to his house. His home was at Wakaf Bharu, just across the bridge. At home were his wife, Lily, and their other three children who were busy completing their homework. We stayed for a while only because a daughter of my colleague was falling asleep. On the way back to Pelangi Mall, my gracious host treated us to some tapai (fermented balls of sweet rice) and bought some nasi briyani for our supper. 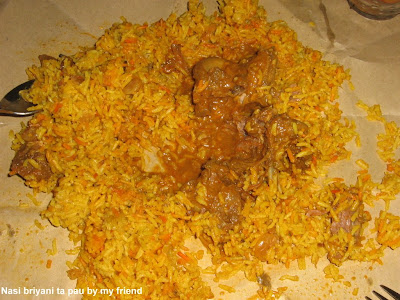 How can I return him his favour. A true friend indeed. We hoped we took the right step in giving him a nice present of Sarawak's bird nest. Orang berbudi, kita berbahasa.