Yesterday, 29th October 2009, I signed and returned the contract of employment to my new employer, and today, I submitted my resignation to my present Company. The first part of taking up a new employment overseas has been completed.

Today too, I informed my four closest friends in Sibu of the news over lunch. Two of them were former colleagues and who have since joined other firms in Sibu. Another two are still serving in the same company as I do. Even though they cajoled me into revealing more details, I have been able to resist giving them the whole picture. I promised them that once I am settled at my new workplace, I would let them know. At this moment, they know that I shall neither be in Sibu nor in Sarawak, since I let them know that I am going to sell my car.

Today too, I went to Mulu Press Sdn. Bhd, the parent company of Sin Chew Daily, to buy an advertisement spot in the classified page to advertise the sales of my three year old Kenari. The cost was RM37.80 for a 6.5 cm x 4 cm spot to be published on Sunday, 1st November 2009, in the Sibu Region. I hope to get a fair price for the car. I Am Going to Die With Such Expensive Broadband

I have a shock! The country I am going to work in has 4 Internet Service Providers, but their rates are all sky high! How can I afford it? An example from one ISP, with the currency converted into Malaysian Ringgit (based on today's exchange rates on XE), are as follow:

The connection is expensive, slow and with downloads limit. If this is to happen in Malaysia, TMNet can as well kiss goodbye to its business or be slaughtered by the ever-complaining public.

So what am I going to do during my leisure after office hours? I am going to die of boredom! No more surfing for beautiful places to visit, no more blogging, no more uploading of photos, no more surfing Airasia website for cheap tickets, and so many other things that we take for granted while surfing in Malaysia. We are indeed blessed living in our own country.

Should I Quit My Sibu Job to Work Overseas?

21st October 2009 might well be the date that changed life, for the better, I hope. I received an important call, an offer to work overseas. 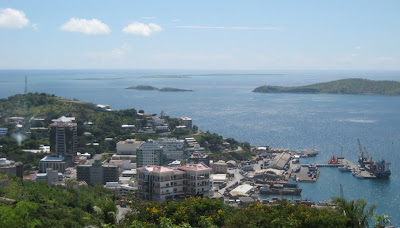 It was on 11th October, at the Sibu Job Fair organised by the Labour Department at the Civic Centre, that I learnt of this position. I expressed my interest to apply for this position to an officer of the company concerned. I knew her, and we talked casually about this position and life working overseas. On Friday, 16th October, I submitted a few questions to the company head office in Sibu asking for more details about this position. The questions were conveyed to a member of the top management at the overseas office, and he called almost immediately. I was really caught off-guard at such speed. He offered me the position straight away, and was expecting my answer by Monday, 25th October 2009.

There have been so many things going through my head since the call. Who is going to take care of the house? What am I going to do about all the furniture, home appliances, personal items, utility bills, etc.? I have no family members in Sibu to take care of things. So, who shall I entrust the house to, and everything in it, while I am gone, maybe for the rest of my working life? How do I dispose off my three year old car? There are so many questions and no answers. I am in a big dilemma. Help!

If everything goes as planned, I shall be reporting for work at the overseas office by 1st December 2009. That's just a month away. Time is moving too fast, and I hope it will slow down a little for me to pause and think.

This overseas posting will also mean that I shall not make it to Guilin/ Yangshuo this year as I shall not be able to take leave until after a year of service. Furthermore, the air ticket price from there to KL will be prohibitively expensive for me. The total amount I paid for the tickets from Sibu/ Kuala Lumpur/ Guilin and back was RM331. I was thrilled to get that bargain price but now, I have to throw it out of the window. Oh! That's painful.

This joke can only by understood by those who know bahasa Malaysia or bahasa Indonesia.

This is the story of a Malay couple meeting each other for the first time on their wedding night...As her new husband came into the bridal chamber, the very, very virgin bride was shocked to see that her new husband had only one leg! She panicked and ran to her mother in the next room, crying out loud, "Mak, Mak, satu kaki!" Her mother shouted back, "Bertuah kau 'nak, dulu bapa kau cuma enam inci!"

This is procrastination at its worst. It has been over a month since I last blogged. During this period, there have been numerous inspirations to write, except that I was not working at my computer on those occasions. So, I left those inspirations there and then.

I have been busy as usual. In fact, I have been studying, and not surfing the net as regularly. I have decided to spend more time to learn Mandarin. As at August 2008, I was able to recognise about 200 Chinese characters already. Being the type whose interests changed so frequently, I dropped the 'lessons' after I subscribed to Streamyx, the local broadband service, that month. It has been over a year now, and my ability to recognise those characters have fallen drastically. I have to re-learn them again.

The reason for learning Mandarin was simple - my impending visit to Guilin, China next year. I have made a commitment to myself to learn about 1,000 Chinese characters and as many words/ phrases by then. By then, I hope I would have started learning to speak in Mandarin. With that, I hope my trip to Guilin would be more rewarding.

There are so many advantages in knowing a new language, especially Mandarin. Knowing Mandarin would open opportunities for me to read Chinese novels by such great writers like Jin Yong (real name Louis Cha) and watch Chinese movies in their original dialogues. I love the sword plays, out-of-this-world kungfu, air-borne skills, etc. One of my favorite characters is Xiaolongnu, played by Jacqueline Wu in The Return of the Condor Heroes. She has a beautiful, melancholic look. I have been searching high and low for the series in DVD, and finally found it at Wisma Sanyan two days ago. I was so happy paying RM20 for it. Here's a clip from the TV series. Isn't she gourgeous? There is a lady near my office who looks like her. 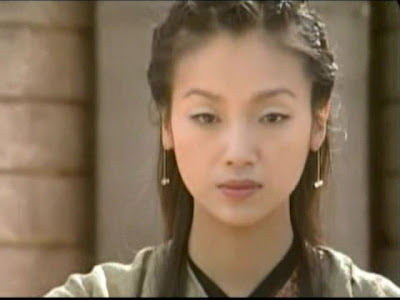 There is another set of DVD which I am looking for, namely the TV series Xiao Ao Jiang Hu (Laughing in the Wind, also known as Smiling, Proud Wanderer also known as State of Divinity) from the CCTV production in 2001, starring Li Yapeng and Xu Qing. I love the beautiful scenery and the sword plays in this TV series. Does anyone know where I can get the DVD? Here is a wallpaper from an Iranian fansite. 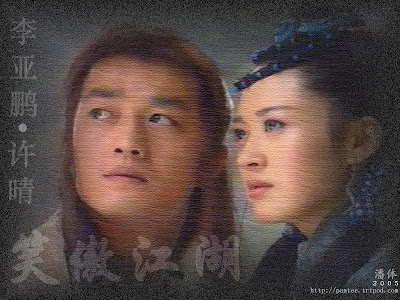 Posted by One Short Life at 8:29 PM No comments: